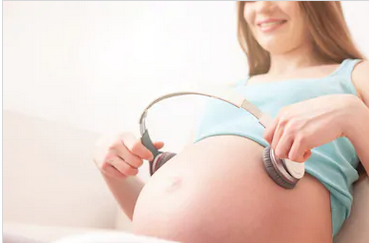 Language development is a topic that fascinates me for years and it all started by observing my oldest daughter slowly responding and developing her linguistic skills by interacting with the outside world. Making funny but understandable errors, learning by trial and error…Now when there is a small baby growing in my belly, which response to touches and voices, I wonder how much it actually hears and how much what it hears affects its future development…

Most of the people and research focuses on the brain of the newborn and the language acquisition after the birth, but brain areas corresponding to the language development appear in the brain already during the 30th week of pregnancy, and as soon as from the 18th week of pregnancy, it can ‘hear’ sounds of your body such as your heartbeat and since the 27th week auditory learning becomes possible…There are studies that show that a fetus in the womb reacts to the mother’s voice, to the music, etc. There are also studies that show that when the baby is exposed to one language during pregnancy and adopted at birth, it can afterward still produce mother language sounds or distinguish some words from that language. All these findings are impressive and bring up an interesting question – how is the prenatal exposure to sounds and languages affecting the later development of the language for the baby? Can we improve kids’ linguistic or musical skills by prenatal exposure to foreign languages, by talking to them or playing music to them? Or is how much we talk to the kid affecting our bonding and connection to the baby? Maybe we cannot answer these questions or not all of them, but we can see a bit more, what is happening in the womb, we can explore the life in the darkness and see how the small brain is a step by step developing and responding to the outer world…

Neurophysiology of the fetus

First, let’s see, what happens with the baby brain which enables it to hear and recognize the language, all of which later leads to the fact that newborns might be soothed by familiar sounds like an adult heartbeat or that they prefer mother’s language to other languages…. The onset of hearing in humans is around 27 weeks of gestational age [1], but already since 18th or 19th week, the baby can respond to sounds of the body such as heartbeat or stomach rumbling [2] as the human cochlea starts to be slowly functioning [3]. That is the time when external auditory inputs start to have an effect on the reorganization of the auditory cortex [4]. To test the onset of hearing, [1] performed an experiment, where they exposed the fetus to pure auditory stimuli of different frequencies (100, 250, 500, 1000, and 3000 Hz) – from 19 to 35 weeks of gestational age (GA). Measuring the responses by loudspeaker on maternal abdomen and by ultrasound, they observed first responses for 500 Hz at 19 weeks of GA, then responses to lower frequencies appeared (At 27 weeks, 96% fetuses were responding to 250 and 500 Hz) and the latest ones were responses to higher frequencies (responses to 1000 and 3000 Hz haven’t been observed till 33 and 35 weeks, respectively). As the baby brain matures, a big decrease (20-30 dB) in the intensity level required to elicit a response was observed. This corresponds to the neurophysiological maturation of the inner ear, which seems to be matured at the end of the 8th month when all relevant neuronal synapses take their place [3].

In the 30th week, brain areas corresponding to language development are developing ([5, 6]). As you maybe know, there is observed a left hemisphere dominance for language processing, which seems to be genetically given and we can observe asymmetric development of the brain already before birth. For example, the temporal plane layer in the left hemisphere is larger than in the right one. We can also observe that the left hemisphere has different sensitiveness for speech already from birth (response was measured by electrical activity – event-related potentials, Mehler). Interestingly, the development of cortical regions that are connected to language is slower in the left hemisphere than in the right one (e.g., right temporal plane develops at the 30th week of GA, but left one 7-10 days later) ([7, 5]). The fact that brain regions for language development are distinct already at birth might be a partial verification for Chomsky [8] hypothesis, that there exists a universal innate grammar, which we just fill in with vocabulary and rules.

This above-mentioned development leads to the fact that after 32 weeks of gestation age, the baby may start recognize vowel sounds from your language [2], which further leads to the findings which we will mention later, that the newborn prefers the native language to other languages [9].

Sound and music in the womb – is the baby partying there?

How can we measure what the baby actually hears? It is easy. You can just place a microphone or hydrophone inside the vagina close to the baby’s head and listen…

You will hear a lot of background noise, body noise and mainly low frequencies around 500-700 Hz, all of which are highly attenuated [10, 11, 12]. Nevertheless, mother voice and external speech will still be clearly emerging above the background noise with well preserved prosodic characteristics. [11, 12] found out that even some phonemes/words are still recognizable (up to 30%). All these speech connected sounds are quite silent as they are attenuated significantly. Although you can hear all (close by) external speech, you will get during your life in the womb most familiar with the mother’s voice, because there is significantly better transmission of maternal voice than of external voices – Querleu found out that there is 20dB attenuation of external voices and only 8 dB of mother voices [11]. How can this be explained? It seems that there are 2 pathways transmitting the voice – one is the same for both maternal and external speech, but the mother’s voice is transmitted also through body tissues and bones which enables kids to get more used to this voice.

This is closely connected to the findings on the newborns, that mother’s voice has calming effects for < 2-week old kids and is more attractive for the newborn than other female voices. On the contrary, newborns do not show any preference for the voice of the father compared to other male’s voices, even after 4-10 hours of exposure to the father’s voice after delivery. [10a] Spence [13] went even further and found out that infants prefer the maternal low-pass filtered voice, but not the maternal whispered voice.

What is another interesting finding is that external auditory stimuli in general increases motor responses (both long term and startle responses) as well as heart rate responses [10], but the mother speech can decrease fetal heart rate – the most when the speech is in low frequencies and around 70dB. The responses of the fetus were measured for tones, vibratory frequency noises, or EAL stimulations during quiet and active sleep and during active and quiet wakefulness of the baby – it has been found that although to tones the baby starts to respond at 27-28th week of GA, to EAL stimuli motor responses appear already in the 24th week [10]. Bigger responses can be observed during wakefulness than during sleep. Unborn babies might even start to cry if exposed to a sudden loud noise.

And how is it with the music? Feijoo [14] measured kids at delivery and 4-5 days old and found out that kids were soothed by the music which their mother listened regularly during last 3 months of the pregnancy way more than any other music.

Question is, how can we find out what a newborn actually prefers? There is an experiment called the non-nutritive sucking behavior of the newborn which is supposed to measure babies’ responses to individual stimuli. What should this mean? It is easy, this technical term hides an easy thing – behavior while sucking on a pacifier. So basically we measure how much the baby is sucking, what are the pauses between sucking and frequency of sucking. So easy :).

Using this method, it has been found that newborn babies exposed to the adult heartbeat (72 beats/s) were sleeping earlier and gained weight quicker [16]. Also, intrauterine background noise had a short term pacifying effect ([10a], Murooka [17]). Familiar stimuli were also preferred by a child in selection tasks.

Back to mother’s voice…DeCasper [18] found out that 2-3 days old babies preferred a story that mother read 6 weeks prior to pregnancy to the one they never heard. And have you ever heard about fetal ‘soap’ addiction? It was described by Hepper in 1988 [15], [19]. What they found out? That there were mothers who regularly watched a soap opera ‘Neighbors’ during the last weeks of pregnancy (some even twice a day). Maybe you can already guess what they observed for these babies after delivery. A crying baby who was ‘listening’ to the soap opera already in the womb, is more likely to stop crying when the program begins than the baby of a mother who was not watching it in her pregnancy.

So far I was mainly speaking about voice and sounds, but what about the actual languages? Moon [9a], measured 40 infants about 30 hours old in the nursery using the test for sucking behavior when listening to vowels from native and unfamiliar language. They found out that babies were sucking longer for the foreign language than for the native tongue (independent on time since birth, 7-75h), which indicates that they can differentiate between these two languages and it seems that the ambient language to which fetuses are exposed in the womb affects their perception of the native language at phonetic level. In another study, Moon et al. [20] measured 2 day old kids of French and Russian mothers while the same bilingual woman was talking to them. These kids again preferred the mother’s tongue to the unfamiliar one and the same behavior was observed also for low-pass filtered versions, which kept only the prosodic cues of the languages. On top when they measured kids from families speaking neither French nor Russian, they were not able to discriminate between these 2 languages. [21]

Maybe you might be a bit skeptical about this sucking behavior test…Then there is another study conducted by May et al. [22], who measured a neural activity of the brain using NIRS (near-infrared spectroscopy) study on 20 monolingual English 0-3 days old neonates. She let them be exposed to low-pass filtered sentences of forward English (familiar language), forward Tagalog (unfamiliar language), and backward English and Tagalog (non-language) and measured neural activation by NIRS. They found out bilateral (in both hemispheres) activation connected to the familiarity of the language and observed different activation for Tagalog (unfamiliar language). This indicates that exposure to the language in uterus influences the brain responses of the baby to the native language after birth.

So it actually seems that babies in the womb really listen to us as soon as their hearing enables them so, although what comes to them is highly attenuated and filtered for high frequencies. After several months of this auditory experience, they become attracted to the familiar sounds and patterns of the native language(s). But it is possible that they actually learn even more from their prenatal experience as they might become familiar with the prosody of the languages heard in utero (‘prenatal prosodic bootstrapping’), which might be crucial for later language acquisition [23]. To conclude, we can see that long-term premature exposure to auditory (or other sensory stimuli) in utero might lead to both prenatal and postnatal responses to these stimuli.

And one last thing to mention, the auditory and language system as a whole continues, of course, to develop also after a birth – e.g., hearing develops for another 5-6 months after birth and language areas keep developing for years, so it needs continuous stimulation through speech, music, and other sounds, otherwise we might miss the important times (so-called sensible periods) for its development which might lead to its underdevelopment, as observed for linguistically or socially deprived ‘wild kids’…but that is a topic for some other time…